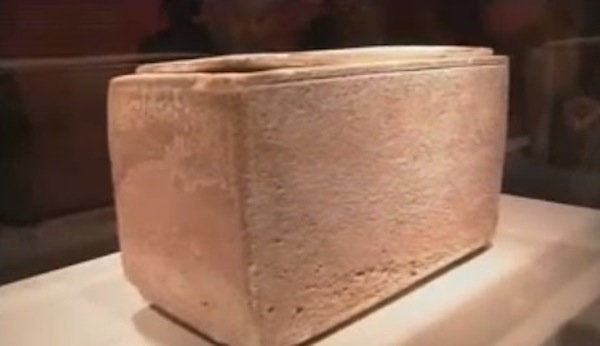 In the Spring of 2002, Andre Lemaire, an expert on ancient Semitic scripts, was shown photographs of several ossuaries acquired by a collector who was an acquaintance. The collector had acquired one particular ossuary from a dealer in East Jerusalem. The collector had been told that the ossuary came from Silwan, an Arab village just east of the City of David (the old city of Jerusalem). There was an inscription on the side of the ossuary that says: “Ya’akov bar Yosef achui d’Yeshua”. In English: “James son of Joseph, brother of Jesus” (Hershel Shanks and BenWitherington III, The Brother of Jesus, 2003,11 – 12).

Many believe that this ossuary is the actual bone box of James, the brother of the Lord Jesus. Subsequent tests have proven it to be consistent with a box which has an ancient origin. Laboratory tests have analyzed the patina (the film formed from chemicals seeping onto it while being stored for hundreds of years in a cave) covering the ossuary and concluded that the inscription did not display any inconsistencies with material found on the rest of the ossuary. Paleographers who have analyzed the inscription first hand have found no sign of forgery, either. “The inscription is written in the Jewish script, it was done with a sharp instrument and I think it was done by the same hand. It is an authentic inscription,” Prof Gabriel Barkay of Bar-Ilan University explained.. Owner Oded Golan cites expert evidence from the trial showing the patina – a biological crust formed on ancient objects – inside the grooves of the inscription.”There is no doubt that it’s ancient, and the probability is that it belonged to the brother of Jesus Christ,” said Golan (from http://www.theguardian.com/world/2013/dec/25/burial-box-earliest-reference-jesus, December 2013).

It seems reasonable to date the ossuary as having originated in the first century. Biblical archaeologist and commentator Merrill Unger writes: “Not a single one of the numerous Jewish tombs in the region of Jerusalem can be dated to the period after AD 70. All inscribed ossuaries hitherto found in the vicinity of Jerusalem belong to the period 30 BC to AD 70” (Merrill F. Unger, Archaeology and the New Testament (Grand Rapids: Zondervan Publishing House, 1962), 25). It is widely believed that James died in AD 62 (Shanks, 166 – 68). The first century historian, Josephus’ account in Antiquities provides historical evidence of the circumstance of his stoning which was overseen by Ananus (Flavius Josephus, Antiquities 20.9. The Works of Flavius Josephus. trans. William Whiston, 1901).

In addition, the fact that the discovered ossuary is inscribed with the name of deceased’s brother is in itself unusual. Most Jewish ossuaries in the area near Jerusalem from the first century mention only the deceased person’s name and his father’s name. However, in some cases there were exceptions if the deceased was associated with some good work for which he was well known. For example, one ossuary inscription referred to “Simon (Shimon) as the builder of the sanctuary temple” (Shanks, 77). It seems to be the case that James’ family wanted to honor him by associating him with his well-known brother, Jesus.

Biblical Archaeology Review editor Hershel Shanks provides a thoughtful analysis of the likelihood of all three names (James, Joseph, and Jesus) appearing on any ossuary from the first century period near Jerusalem. His analysis concludes that the odds of this occurring is amazingly only ¼ of 1%.[1] Given the fact that the odds are so low for all three names appearing together, and given that the ossuary has been verified as being an ancient inscripted first century antiquity found in the area where James had lived and died, it seems likely that this ossuary belonged to James, brother of our Lord. This discovery provides further verification of the historical reliability of the facts of the New Testament and ultimately of the resurrection of Christ.

Bible verse of the day

Do not withhold your mercy from me, Lord; may your love and faithfulness always protect me.
Psalm 40:11
DailyVerses.net